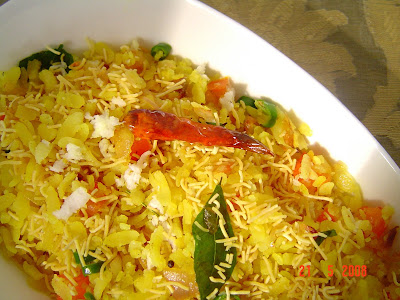 I have been eating poha for as long as I can remember. However,the poha that I grew up eating and the one that I mostly make now are rather different. Till I moved to Bombay, I was only familiar with turmeric-less poha made with a sprinkle of red chilli powder, which tinged it with a gentle pink-brown.

It was in Bombay that I learned how to make batata, kanda poha with the characteristic yellow hue. And recently, after reading Kajal's post on poha, I have started adding freshly chopped tomatoes and sev to the poha, which adds such an interesting texture and flavour to the poha that now we don't like it any other way.

I usually skip potatoes and peas, unless I am making poha or guests as I find it too 'carby' for a regular breakfast. That aside,my method almost the same as Kajal's. Thanks Kajal, for introducing us to these yummy additions to our regular poha. We totally love it ! 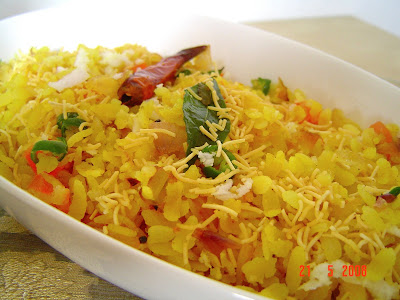