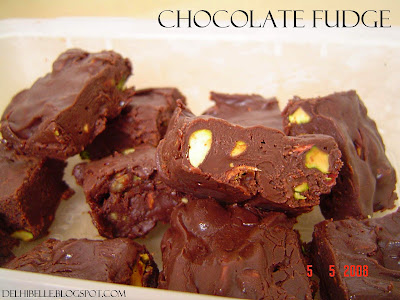 It's a good thing that my dessert making skills are pathetic, else I would have been 5 kgs heavier ! However, this chocolate fudge recipe from the very talented Deeba's blog inspired me for two reasons : It needs all of 5 ingredients, one of which is salt aaand it was whipped up by Domestic Goddess Junior who is less than half my age !
Encouraged by the great results, I set out to try this fudge last night. The only change I made was that I reduced the quantity to less than a third of the original as I did not want 64 pieces of wicked calorie bombs in the house ;-)
A little research on Nigella's recipe on which these are based told me that they are 70 calories a piece. Just right for a euphoria inducing cocoa shot after those dull dinner from leftovers ! See original recipe here :
I used :
1 3.5 oz bar of Lindt Excellence 70% Dark Cocoa Chocolate Bar
1/3 tin of milkmaid condensed milk
( Its so yummy that I can finish half the tin in a go !)
10g unsalted butter ( 3/4 tbsp)
a pinch of salt
handful of pistachios, chopped coarsely
Melt the first four together, mix the last, cool, cut, devour !
For the detailed recipe and pictures, hop over to Deeba's blog.
Thank you Deeba for such a nice recipe, and thanks to your lovely daughter for showing me how its done. Finally, something from your blog, a dessert wrecker like me can make :-)